In my last post, I missed a huge part of who Christ is, and I was kind of okay with saving it for last.

Let’s start with the basics: from my last post (that was 3 weeks over due), Matt Chandler’s sermon over identity helped me understand that we who are believers are in union with Christ, who takes away our old self and makes us new. And because of this union with Christ, as a believer, we have been called into a relationship with Him. A relationship based on love and grace, that changes us from the inside out; a relationship that calls us to be like Him and to find who we are in who He is.

But what was missing from that description is what Jesus came and died for: freedom in Him. We missed the biggest part: who Christ is, is freedom.

And with this freedom comes a whole lot more than the freedom that our country offers. This freedom was given by the Son of Man when He took on my sins, our sins, and nailed them to the cross. His death freed us from every sin, past, present and future. His death washed away our guilt and our shame.

His death offered us a freedom that gives us power and victory over our sin, over our brokenness; it is a power that comes from Christ and our union with Him.

So if Christ is freedom, where does that lead us when trying to find our identity in Him? I think it means we are called to be free.

This idea is simple, but difficult. Taking hold of this freedom is hard when we’ve got a broken world and a devious serpent trying to pin us down with the weight of our sin, but what is so beautiful is that this freedom is always there, waiting for us to come home.

For we know that our old self was crucified with him so that the body ruled by sin might be done away with, that we should no longer be slaves to sin—   because anyone who has died has been set free from sin.
Now if we died with Christ, we believe that we will also live with him. For we know that since Christ was raised from the dead, he cannot die again; death no longer has mastery over him. The death he died, he died to sin once for all; but the life he lives, he lives to God.
In the same way, count yourselves dead to sin but alive to God in Christ Jesus. Therefore do not let sin reign in your mortal body so that you obey its evil desires. Do not offer any part of yourself to sin as an instrument of wickedness, but rather offer yourselves to God as those who have been brought from death to life; and offer every part of yourself to him as an instrument of righteousness. For sin shall no longer be your master, because you are not under the law, but under grace.

So let’s live like we are alive in Christ, unashamed of who we are, and totally free- because living in Christ is living with and in He who set us free. 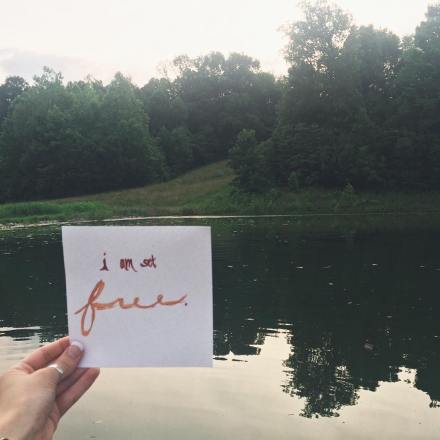